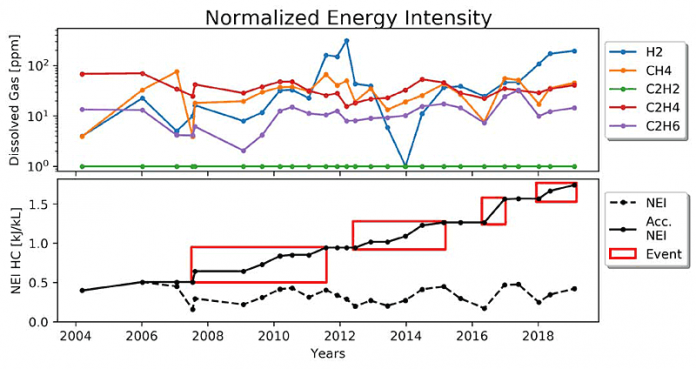 One of the most important steps when looking at DGA data is to decide whether the data support the existence of a fault that is actively breaking down the insulation before you try to use a triangle, pentagon, or gas ratio method to identify a fault type. Otherwise, you are diagnosing random measurement noise, not the transformer. Conventional methods assign limits to each of the gases to detect and assess abnormal gas formation. Formerly it was common practice to add gas concentrations together to get total dissolved combustible gas (TDCG). The hope was to simplify the task of detecting abnormal gas production and interpreting rates of change. This, however, was equivalent to counting U.S. Dollars, Mexican Pesos, Bitcoins, and Canadian Loonies and thinking that the sum represented “value”.
Chemistry dictates that each gas we observe requires a different amount of energy to break away from the original insulating material. Instead of trying to interpret several indi¬vidual gas concentrations, why not follow the energy associ¬ated with the gassing? The energies required to form the gas can be weighted by the gas concentrations and added up.
This idea of using standard heats of formation of fault gases for DGA was worked out in Jakob et al. 2012 and demonstrated to be an improvement compared to TDCG and other gas concentration sums. Soon after that, chemist Fredi Jakob realized that it would be better to create a fault energy index, which he called normalized energy intensity (NEI), to represent the influence of an internal fault on the insulating oil. That idea was presented in Jakob & Dukarm 2015, where it was shown that NEI was very useful for trending fault severity and not partial to any particular fault types. The figure illustrates how trending cumulative NEI simpli.es the detection of suspicious gas production.
NEI, now renamed NEI-HC, is based on the low molecular weight hydrocarbon gases generated from cracking mineral oil. Another fault energy index, called NEI-CO, is based on the carbon oxide gases formed by pyrolysis of cellulose in paper insulation. The formulas for NEI-HC and NEI-CO are shown in Equations (1) and (2) below. Since each set of gases comes from a different insulation material, you can assess and track which faults are affecting paper, hot metal in the oil, or both. That knowledge can help point to the root cause and better estimate the severity of the problem.

The highest heat of formation for the hydrocarbons is C2H2 and for carbon oxides it is CO. This physically confirms the general intuition that these gases are the most concerning to see in transformer DGA.
You can trend fault energy indices to identify gassing epi­sodes and relate them to external events such as through faults, maintenance work orders, and load changes to help determine what might have triggered the gassing. Also, you can track the cumulative energy over the history of the transformer to coun­teract effects of gas-loss (see previous article in this series).
Watch for more articles in this Electricity Today series about advancements in DGA interpretation.
REFERENCES
1. A Thermodynamic Approach to Evaluation of the Sever­ity of Transformer Faults by Fredi Jakob, Paul Noble, and James Dukarm, IEEE Transactions on Power Delivery, vol. 27, no. 2, April 2012.
2. Thermodynamic Estimation of Transformer Fault Severity by Fredi Jakob and James Dukarm, IEEE Transactions on Power Delivery, vol. 30, no. 4, August 2015.
For more information on this article, please email info@deltaxresearch.com or visit www.deltaxresearch.com. 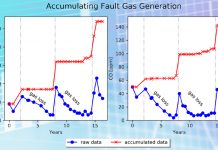 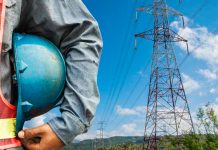 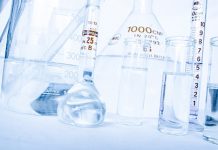 Dr. Zachary H Draper and Dr. James J Dukarm
0
One of the most important steps when looking at DGA data is to decide whether the data support the existence of a fault that...