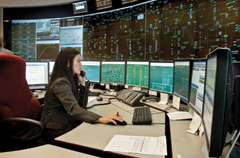 Grid modernization is a buzz term used by regulators, utilities, and other participants within North America’s power sector. Modernizing the power grid is the proposed answer to North America’s aging electricity infrastructure problem, which, in fact, has become a pandemic worldwide. Some visualize grid modernization as a collective sector/government effort to replace aging equipment such as power transformers and transmission towers with new up-to-date equipment. However, realizing this vision is a challenge in itself. Massive costs are involved in replacing old equipment.

Many regulators and stakeholders envision grid modernization as an aged power grid equipped with digital technologies (that is, the Smart Grid). Specific examples include substation automation, two-way communications, and load detection.

Specifically, the power sector in Ontario has witnessed changes on a number of fronts over the last decade. Gone are the days when a small number of large generators supplied Ontario with its electricity in bulk. At that time, the focus was on the system, rather than the consumer.

In recent years, Ontario’s power grid has evolved into a much more diverse system with an increased number of generators and new forms of supply. Add to this the millions of smart meters and other Smart Grid technologies designed to empower consumers to take greater control over their energy use.

Bruce Campbell, the Chief Executive Officer of the Independent Electricity System Operator (IESO) says that IESO, as the hub of Ontario’s power grid, has endeavored to work with all industry participants to anticipate and prepare for the changing needs of the system. Mr. Campbell answered a few questions for Electricity Today Magazine regarding IESO’s involvement in Ontario’s ever rapidly-changing power sector.

Q: What is IESO’s role in grid modernization?

A: Increasingly, the lines between Ontario’s distribution and transmission systems are being blurred. For example, our control room operators see a much different ramp profile on a sunny morning than they did five years ago, which is understandable given the roughly 1,000 megawatts (MW) of embedded solar in the province.

Because of this interconnection, the IESO and Ontario’s electric utilities have worked together to expand the tools used to monitor both systems. We now have information about what generation is taking place on the low-voltage network and we use that information to understand and anticipate its impact on the high-voltage system. In addition, an increased number of exciting innovations are on the way.

The IESO is carrying out a request for proposals (RFP) for storage seeking a broad range of technologies that include distribution-connected projects. This is yet another example of the increasingly symbiotic relationship between the low- and highvoltage
systems.

Q: How can grid modernization enhance the performance of Ontario’s aging power grid (for example, the capability to produce operating limits on a dynamic basis)? How is Ontario utilizing Smart Grid technologies to make the power grid operate more efficiently?

A: Building new infrastructure is not always the answer. In many cases, we can use technology to get more out of existing infrastructure.

One specific example comes to mind. The IESO uses a set of operating limits that serve as a sort of set of rules for highway driving—think speed limits combined with Ontario’s Highway Traffic Act. We recently transformed those constraints from rigid formulae into more flexible, dynamic calculations. The resulting Online Limit Derivation tool set allows the IESO to flow much more power through specific points on the grid, reducing congestion and increasing operational flexibility, without compromising reliability.

The restoration effort following the July 2013 blackout in the Greater Toronto Area gave us the opportunity to put this new tool set to use. When 3,800 MW of load was interrupted, we used the new tool to capture the full state of the power system and immediately begin simulation studies. In the past, we would have relied on partial
simulations.

Recently, as we worked hand in hand with Hydro One and other local distribution companies, we studied an exact model of the system. The tool helped us all restore power much more effectively and quickly than would, otherwise, have been possible.

Q: How can utilities, IESO, and other electricity market participants increase awareness to customers to encourage engagement in modernization programs such as demand response?

A: The IESO places a large focus on talking to our market participants and the broader sector about issues that are important to them. These relationships are built on hard work and trust. When new initiatives are launched, we have to redouble our efforts, informing customers about changes, listening to and addressing concerns, and demonstrating the benefits.

Initiatives such as demand response and a new capacity market are prime examples of those efforts. These initiatives provide a tremendous opportunity for consumers. Already, we see roughly 1,200 MW of demand response on a hot summer’s day—mostly due to pricing mechanisms such as the Industrial Conservation Initiative [an electricity program for industrial consumers] and time-of-use rates. Consumers are avoiding higher prices in the middle of the day and reaping the results in their energy bills.

Therefore, it is not surprising that we see tremendous opportunities to use market pricing to expand current levels of demand response. We are working to increase demand response within the real-time market, and dispatch more load based on price.

We are talking with stakeholders about developing new pilot projects to explore options further. Finally, we are looking into a capacity market for incremental supply needs, which would allow demand response resources to compete on an even playing field with traditional suppliers to provide capacity.

LAST LOOK
Campbell notes that market price is a valuable tool when considering grid modernization options. “Clear price signals have grown significantly in importance in helping to meet system needs and providing a co-ordinating influence for the many moving parts that contribute in some way to the system. At the end of the day, grid modernization must ensure that the system continues to provide the best value to users.”

Campbell concluded that wholesale market is a key component of the continued evolution of the power grid. A wholesale market provides the power sector with the flexibility to respond to changing conditions and gives suppliers and consumers valuable data to make informed operational decisions. Additionally, a wholesale market helps promote growth and innovation and opens the field to a broader range of participants, which includes new technologies, with the end goal of working to drive efficiencies and reduce costs.