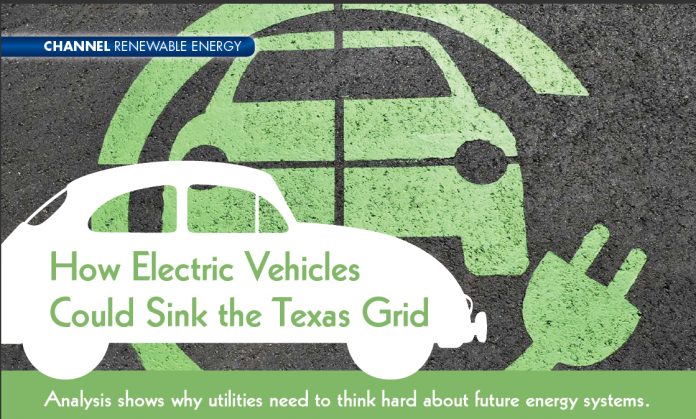 Simultaneous charging of just 60,000 next-generation electric vehicles could one day threaten the Texas grid, an analysis has shown.

Based on a 100-kilowatt EV battery with a 5-minute charge time, which could potentially be the standard for EVs in three or four years, demand from 60,000 cars charging at once would equate to 70 gigawatts, said analysts from GTM’s parent company, Wood Mackenzie. That’s the same as the current peak demand for the whole of ERCOT, said Prajit Ghosh, Wood Mackenzie’s head of America’s power and renewables research.

The calculation, carried out as part of research for a Wood Mackenzie report on the impact of EVs, shows how important it will be for grid operators and other stakeholders to stay ahead of the vehicle electrification trend, Ghosh said.

“The idea that electric vehicles are a big disruptive force, that’s mainstream,” he said. “As you sift through the micro issues, you understand there are forces that can [affect] the pace at which electric vehicles can grow.”

Grid load is one of those issues: 60,000 might sound like a lot of cars to be charging simultaneously, but it is only a quarter of 1 percent of the 24 million vehicles that the Texas Department of Motor Vehicles says it registers every year. At current charging rates, that level of EVs wouldn’t dent the grid. “If you charge a 100-kilowatt-hour battery in 1 hour, the instantaneous demand that comes out of it is 100 kilowatts,” Ghosh explained.

The challenge comes as EV manufacturers move toward their goal of increasingly rapid charging. “If you assume a 100-kilowatt battery gets charged in 5 minutes, it means an instantaneous demand of 1.2 megawatts,” said Ghosh. “What that means is that as we get more and more electric cars on the system, we’ve got to think about how we manage this charging. You can have lithium-ion batteries that charge in minutes.

But the physics of charging won’t change. That is a fundamental truth.” Failure to properly account for these effects could lead to a situation where, for example, EVs increase rather than decrease the demand for fossil fuels by upping the requirement for peaking power on the gird. Wood Mackenzie is looking to explore these intricacies with a series of interdisciplinary reports in 2018.