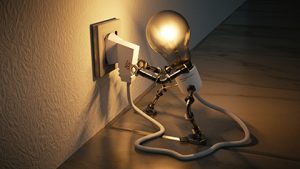 Utilities worldwide have been on a roller-coaster ride, and an often painful one, over the past decade. Despite the sharp growth in global demand for electricity, many utilities have lost value or posted below-average returns. A McKinsey analysis of 50 major publicly listed utilities from Asia, Europe, and North America showed average total cumulative returns to shareholders of about 1 percent from July 2007 to July 2017, compared with 55 percent for the MSCI World Index.
Utilities with high exposure to merchant revenues did even worse. Two reasons stand out. First, the collapse of merchant conventional generation eroded profits in Europe and the United States, and the growth in other sectors, such as renewables and transmission and distribution (T&D), was not enough to compensate. Second, utilities worldwide are losing market share to entrants from new sectors, such as the financial industry and the oil and gas industry (Exhibit 1).
In the next decade, we expect electricity demand to increase faster than any other kind of energy, due to economic growth in Africa, Asia, and Latin America, and the electrification of final energy demand, specifically in transportation and heating. Massive new investments will be needed to keep up.
The International Energy Agency (IEA) estimates that from 2016 to 2025, there will be $7.2 trillion in investment in the power sector (Exhibit 2), almost $1.0 trillion more than in the previous decade.
This could help utilities to improve their performance and create value—and in fact this may be happening for some large utilities. At the same time, though, competition could intensify as the number of new entrants increases and as previously closed markets, such as Japan, Mexico, and Saudi Arabia, open up.
We have developed a model that estimates the value pools available to all players in the utility sector, including power generation, networks, renewables, and downstream products and services (for insights generated by the model and not addressed in the main text, see sidebar below, “Other insights from our model”).