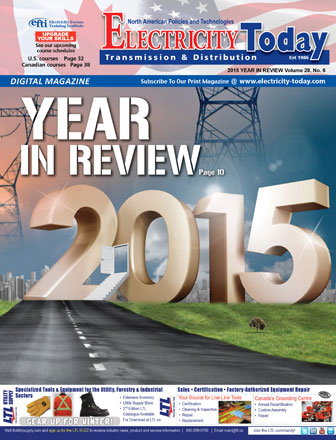 The year 2015 has come and gone so quickly. Those who work in the power industry will concur that time might move faster than the speed of light (figuratively), but a lot still can happen within a 365-day time frame—and much did happen in 2015. Here are a few industry highlights.

GRIDEX SECURITY EXERCISE
In November 2015, the North American Reliability Corporation (NERC) hosted GridEx III, a bi-annual simulated cyber and physical attack on the power grid. Participating electric utilities, regulators, and other industry players across North America responded to these coordinated security threats and incidents through a series of exercises. The purpose of these exercises is to strengthen crisis communications relationships and provide feedback for lessons learned.

GridEx III had a variety of objectives including (1) exercising crisis response and recovery processes, (2) improving communications internally and externally, (3) identifying lessons learned, and (4) engaging senior leadership. According to NERC, the GridEx III report, which highlights event happenings, will be available in early 2016.

OBAMA’S CLEAN POWER PLAN
According to Canadian Energy Law, the electricity sector is the primary source of carbon emissions (roughly 33 percent annually) in the United States. In an attempt to remedy this problem, in August 2015, U.S. President Barrack Obama announced his Clean Power Plan, a blueprint that requires the country’s power plants to reduce their carbon emissions. According to the U.S. Environmental Protection Agency (EPA), Obama’s plan contains tough, yet achievable, standards for power plants as well as customized goals for individual states to reduce the carbon pollution that is causing climate change. The White House website states that the standards set within the Clean Power Plan will reduce carbon dioxide emissions by 32 percent by 2030. Additionally, the U.S. government expects that the Clean Power Plan will lead to 30 percent more renewable energy generation in that same year.

A WORLD WITHOUT COAL
Canadian Energy Law points out that Canada’s electricity sector accounts for roughly 10 percent of total carbon emissions. Justin Trudeau, the country’s new Prime Minister, recently green lit his government’s promised climate change agenda. Ontario became the first province to become coal free in 2014. In 2015, Alberta announced its plans to follow suit. The province plans to be coal free by 2025. Likewise, the state of California passed a bill in September 2015, which requires investors to divest $476 billion (U.S.) of their coal holdings by summer 2017. SaskPower announced in October that natural gas now surpasses coal as the number one source of electricity in that province.

RENEWABLES ON THE RISE
In September 2015, the Toronto Star reported that the rate of job growth in Canada’s clean energy sector is outpacing that of every other sector. Additionally, in the first half of 2015, renewables accounted for 70 percent of all new generation placed into service in the United States. A tracking report released by Clean Energy Canada in September revealed that investment in clean energy generation in Canada approached $10.7 billion (CAD) in 2014—an 88 percent increase from 2013.

ONTARIO MERGERS & ACQUISITIONS
Ontario is in the process of merging many of its local distribution companies (LDCs). To date, in 2015, Hydro One, the province’s transmission utility, legally closed the purchase of Haldimand County Utilities and Woodstock Hydro. Other provincial distribution utilities PowerStream, Enersource, Horizon Utilities, and Hydro One Brampton are also in the process of merging into one utility. The Hydro One Brampton selloff is part of the Ontario government’s plans to privatize Hydro One. At the beginning of 2015, the Ontario Power Authority also merged with the Independent Electricity System Operator (IESO). The merged provincial crown corporation, which retained the IESO name, is responsible for operating Ontario’s power grid as well as the electricity market in the province. Could it be that a new, more privatized, Ontario Hydro is on the horizon?

THE BOTTOM LiNE
I predict in 2016 that Smart Grid technologies, cyber and physical security standards, aging infrastructure, storm hardening, worker attrition, as well as additional mergers and acquisitions will be at the forefront. What do you think?